We were asked to completely overhaul the control system for a bungee fairground ride.

The new system reduces the amount of start up current required for the motors, allowing the operator to use a smaller, more environmentally friendly generator.

Another benefit of the reduced start up current is that existing lighting rig can be replaced with more efficient sodium lamps. They couldn't previously be used due to the direct-on-line motors' shock loading the system.

When safety measures fail there can be grave consequences. Luckily our client escaped unscathed.

The existing system uses limit switches, however they became clogged as they are used in a dusty environment and didn't follow the gate when it opened.

We were contacted to install a new system. We installed an interlocked key system so that gate can only be open with the key that runs the lift. As it is interlocked, the key can't be removed from either the gate or the control panel when in operation, preventing both from being used simultaneously. 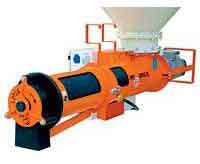 Our customer was using a pair of off-the-shelf cement mixers outside their design parameters and the control system wasn't up to the job.

We designed a remote control panel that could run the mixers to the required level of performance and also incorporated a new fault indication system. 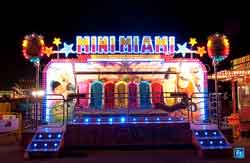 The Miami fairground ride is a popular attraction world-wide. When our client wanted to make a juvenile version, we were commissioned to provide the motor control.

We also provided the geared motors, set the pre-programmed routine and made the control stations.

We have built many custom panels based on specific requirements for a number of applications, including fairground rides, chemical mixers, etc.